My Extreme Sleep Story: In an Igloo

Dressed in a traditional ring seal parka and mittens, topped off with a baseball cap and bright red shades, Kylik Kisoun Taylor looked quietly focused. Mouth set in concentration, he sawed at the edges of a block of packed snow, around four inches thick and the texture of Styrofoam. Crystals of ice fell around him as he showed me how to place another block next to it and pat a handful of snow into the space between the two. One placed after the other, the pieces slowly began to take the form of that architectural structure so characteristic of the Arctic: the igloo.

We were standing on top of a frozen lake around 10 miles outside the town of Inuvik in Canada’s Northwest Territories, 120 miles above the Arctic Circle. My phone told me it was 5°F. We worked inside the half-formed structure, building it in a spiral around us, and as Kisoun Taylor taught me how to build an igloo, he explained how he had learned to do so himself.

Of Inuvialuit (western Canadian Inuit), Gwich’in, and European descent, Kisoun Taylor was raised in the south but returned north as a young man, keen to learn his culture’s traditions. Community elders, traditionally the source of knowledge, however, were unable to show him how to build an igloo; they’d never learned how. Kisoun Taylor was forced to seek answers on Google and instead taught himself. Now he teaches people. “This is the first time in history that the knowledge is going backward,” he said, explaining that young people like him are teaching their elders traditions that have very nearly been lost.

In the last century, nomadic indigenous communities in the Canadian Arctic were forced off the land and assimilated into stationary settlements. Removed from the land they knew intimately, many lost the very skills that had sustained their people for centuries—the ability to build igloos, for example, ensured survival in one of the coldest and most unforgiving environments on earth.

Kisoun Taylor sees the potential of tourism to retrieve and revive those skills: By becoming involved in tourism, local indigenous people can earn a living through practicing and sharing their culture. This is the motivation behind the company he founded, Tundra North Tours, which offers visitors idiosyncratic Arctic experiences such as meeting elders, herding reindeer, and building and sleeping in an igloo. Tundra North Tours’ four-day Arctic immersion package was how I came to find myself in the Aurora Igloo Village.

Kisoun Taylor met our group of four at Inuvik Airport, a two-and-a-half-hour flight north of Yellowknife, the capital of the Northwest Territories. He took a look at our outfits, all expensive brand-name outdoor gear and quickly drove us to his home to find some more suitable northern wear. A fox fur-trimmed parka and pair of seal fur mittens, both hand-sewn by his mother, were pressed into my arms. “If you are in the north, you should dress like it,” Kisoun Taylor said, smiling.

Related: My extreme sleep story: On the ice in Antarctica

An igloo in Canada’s Northwest Territories

The sun was setting when we arrived at the camp, casting a purplish glow over the cluster of igloos dotted over the frozen lake. Dinner was to be served in the largest igloo, which could accommodate up to 12 people. One at a time, each of us slid into the igloo via the short tunnel at the front and took a step up onto a raised platform.

This design, I learned, traps cold air at the entrance and keeps wind out of the raised sleeping area. Around the warmth of the killiq, a traditional stone lamp, we settled onto reindeer pelts to sample country food laid out on an ice table: Arctic char sashimi, beluga jerky, and muktuk (whale blubber) followed by a steaming bowl of caribou head soup with fried donut-like bannocks.

Snow is an excellent insulator, which means an igloo traps heat. The inside can be a comfortable 40 degrees to 60 degrees Fahrenheit warmer than outside. Wrapped up in my region-appropriate clothing and watching melting snow drip from the ceiling, I felt quite toasty but still a little skeptical of how I would fare sleeping alone in my own igloo. There was only one way to find out, and it was soon time for bed.

My night in an igloo

I followed Kisoun Taylor into what would be my igloo for the night. It was a more sophisticated setup than I’d anticipated. He pointed out the control for my heated mattress, which was topped with a sleeping bag, showed me how to turn off the lamp, and, as he left, demonstrated how to keep the warmth inside by correctly closing the door flap. In the absence of my companions’ body heat and warmth of the killiq, however, the cold quickly started to bite.

I set my bag down by the side of the mattress, quickly pulled off my parka and snow pants, and slid into the sleeping bag and pulled it up to my chin. My head poked out, so I kept my beanie on and pulled up my sleeping bag to cover my exposed face. Just one problem: I couldn’t breathe. I uncovered my face and pulled my beanie down to my nose instead, turning to burrow as much of my face into the pillow as I could while still being able to breathe. I shifted around a few more times trying to find just the right position, then fell into a deep sleep.

“Wrapped up in my region-appropriate clothing and watching melting snow drip from the ceiling, I felt quite toasty but still a little skeptical of how I would fare sleeping alone in my own igloo.”

I had left my phone in the truck so I had no idea what time it was when I woke up. Reaching for my bag next to the mattress, I found my contact lenses had frozen solid inside their case. Clumsy without them, I slid out of the sleeping bag and crawled out of the igloo. Shortsightedness notwithstanding, the vast white expanse filled my vision. The igloos glittered in the rising sun, and snow and ice stretched all the way to boreal forest.

The land was still and silent, and I felt at ease. I’d slept deeply the whole night through. I had no phone, contact lenses, shower, or even a mirror, but I felt loosened from those crutches of my everyday life. I willed the sun—and my companions—up, eager for the day to get started. I was starting to understand why someone would come north in search of knowledge. I had learned a little about living with the cold and was open to learning whatever else the north had to teach.

Next, learn what it’s like to sleep in the middle of the desert.

Have your own extreme sleep story? We’d love to hear from you! Email us at sleepenlightened@saatva.com. 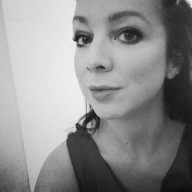 Karen is a freelance travel and culture writer from northeast Scotland. Her work has also appeared in Condé Nast Traveler, BBC Travel, National Geographic Travel, and The Guardian.

Q&A: How This Professional Adventurer Gets Sleep in the Most Extreme Places

My Extreme Sleep Story: Naked and in Public

My Extreme Sleep Story: On the Side of a Cliff